How Kumonodaira Was Formed
Features

The Kumonodaira Plateau has a surprisingly gentle terrain despite being located at the center of the Northern Japan Alps where rows of precipitous peaks stretch. Professor Satoru Harayama, aka Detective of Geology, will solve this mystery. Kumonodaira, located at the remotest region in the Northern Japan Alps, is filled with mysteries. Firstly, Kurobe River that is flowing around the terrace-like shape of Kumonodaira is mysterious. Flow of its riverhead starts from Mt. Warimo-Dake and the Iwagoke-Nokkoshi Col, then changes its direction to south, west, north and east. After passing the Yakushizawa Creek Junction and the Daito-Shindo Trail Junction, the river finally changes its course northward and flows towards the direction of Tateishi. There is no river basin besides the Kurobe River Basin that busily changes direction of its flow. It is contrary to the neighboring Higashizawa Ravine that flows straight northward.

Next mystery is the existence of thick sand gravel layer (gravels) that exposes itself at the trail leading to Kumonodaira and Creeks A, B, C, D along the Daito-Shindo Trail. Though in the alpine region, gravels should be carried away by streams little by little, and the fact that the sand gravel layer with thickness of nearly 200 meters has accumulated is no ordinary matter. Something extremely unusual must has happened.

For thick sand gravel layer, its origin was divided into two different periods, Old and New with sandwiched molten rocks in its border. One for Old Period is 300,000 to 400,000 years old, the other for New Period is 100,000 to 220,000 years old and both layers accumulated in the old ravine that stretched in the direction of Oku-no-Rouka and Tateishi while passing from the Jii-Zawa Creek Junction through the area below the Kumonodaira Plateau. Thus, search began on hypothesis that the event that caused accumulation of thick sand gravels might have happened further downstream. A series of investigation followed. The Takamagahara-Shindo Trail Investigation in August 1986, the Upstreaming the Kaminorouka Ravine Investigation in September 1987, the Nakanotaru-Sawa and the Sugo-Sawa Creeks Investigation in August 1988, the Sugodani Ravine Investigation in August 1989, and the truth came to light.

Let’s see in sequential order how the decorated cake of gravel and molten rocks has come to be made. 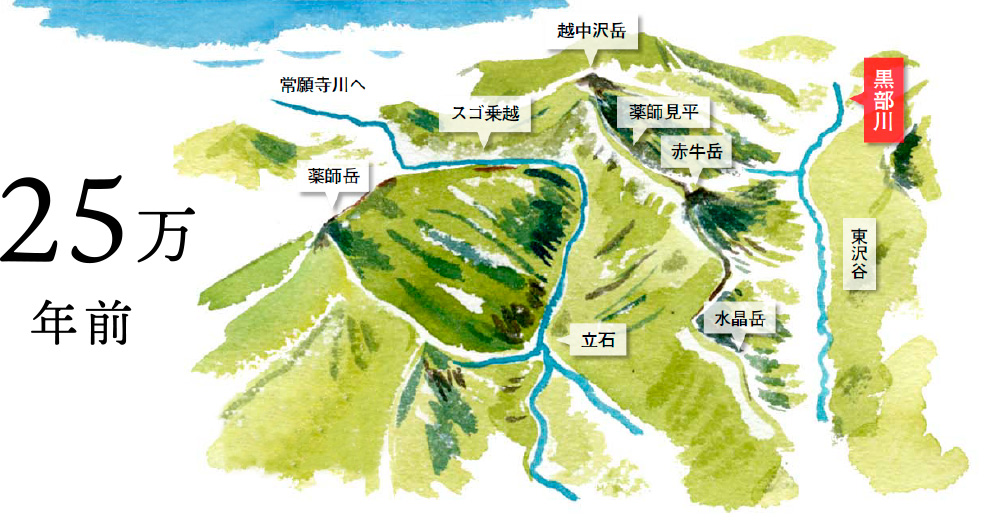 The Kurobe Riverhead and the Higashizawa Ravine were two different rivers.

There was a river beneath the Kumonodaira Plateau that flowed through Tateishi, Sugo-Nokkoshi Col, Sugodani Ravine and joined the Joganji River. In short, the most updraft section of current Kurobe River belonged to the Joganji River System. The Kurobe Riverhead at the time was the Higashisawa Ravine itself. It flowed straight to the north. The watershed for both rivers in 250,000 years ago was the ridgeline stretching out from Mt. Etchusawa-Dake, the Yakushimidaira, Mt. Akaushi-Dake to Mt. Suisho-Dake. Around the Sugo-Ninosawa Creek at the altitude of 1,380 meters, there are remnants of the sand gravels that was transported by the flow of the river at the time. Over 300,000-odd years ago, deep ravine existed between Mt. Yakushi-Dake and Mt. Etchusawa-Dake and its flow seemed to be dammed by lava erupted at around the Kaminorouka Gorge for a period of time. At that time, because the amount of lava was small, flow of the river was restored again to join the Joganji River. The old sand gravel layer in Kumonodaira was the one accumulated in this natural dammed lake at that time. 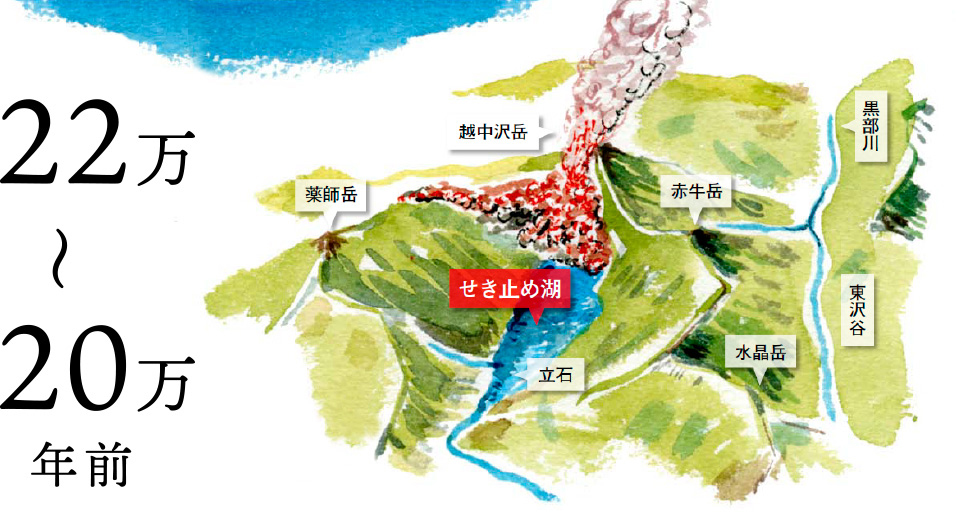 Volcanic activity began around the Kaminorouka Gorge and the Yakushimidaira and erupted lava flowed downstream along the ravine that existed where the current Sugo-Ninotani Gorge is, to the riverside of the Magawa River near Tateyama Caldera. Relative elevation of this aggraded ravine was 350 meters at maximum and one can see that there once was considerably deep ravine before the flow of lava. Amount of lava flow at this time was in great quantity and it filled the ravine and completely blocked the river flow to the Joganji River. The dammed lake reached bank-full stage within few years. Scale of the lake was enormous; 9 kilometers in length, 2 kilometers in width, 300 meters in depth and surface of the lake for bank-full stage was 2,200 meters in altitude. The amount of water reserved was about six hundred million cubic meters, three times as that of the Kurobe Dam Lake. 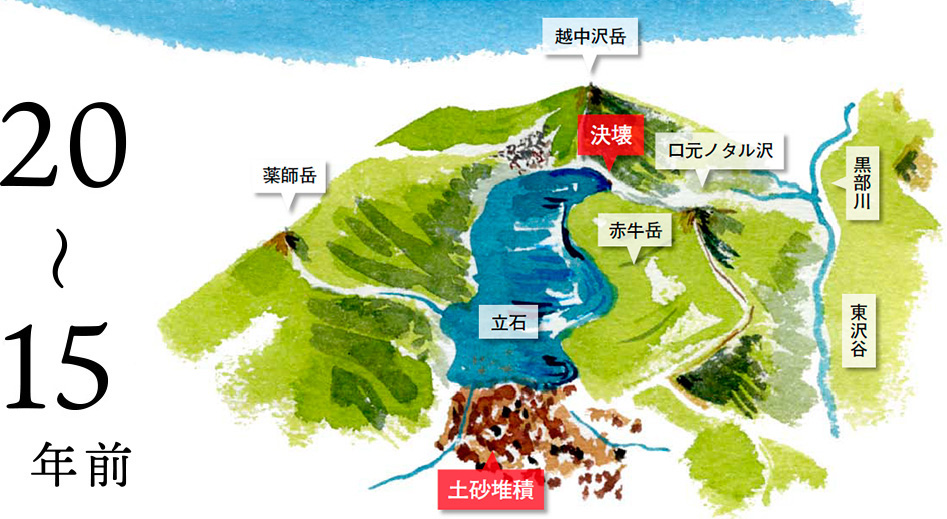 Collapse of the Lake and Profound Transformation of the Kurobe River

Upper surface of lava surpassed altitude of 2,300 meters in the vicinity of the Sugo-Nokkoshi Col. At the same time, it is presumed that a tributary bifurcated from the vicinity of current Okukurobe Hutte stretched westward and reached the vicinity of the Kuchimotonotaru-Sawa Creek. The portion of resubmitted proposal for watershed from between this tributary is presumed to be in the vicinity of altitude 2,200 meters. Water flow that overleaped the col of the watershed overflowed into the tributary. Gravel were transported downstream to the lake and the lake was gradually filled by the gravel gradually from the upper side of the stream. Those gravel are the newer sand gravel layer of Kumonodaira. Overflowed water first eroded the vulnerable portion of the volcanic field and ultimately the lake had collapsed, causing massive flood, and the water even came to erode the granite bedrock severely. This is the origin of the steep cliff of Shimono-Kurobinga. 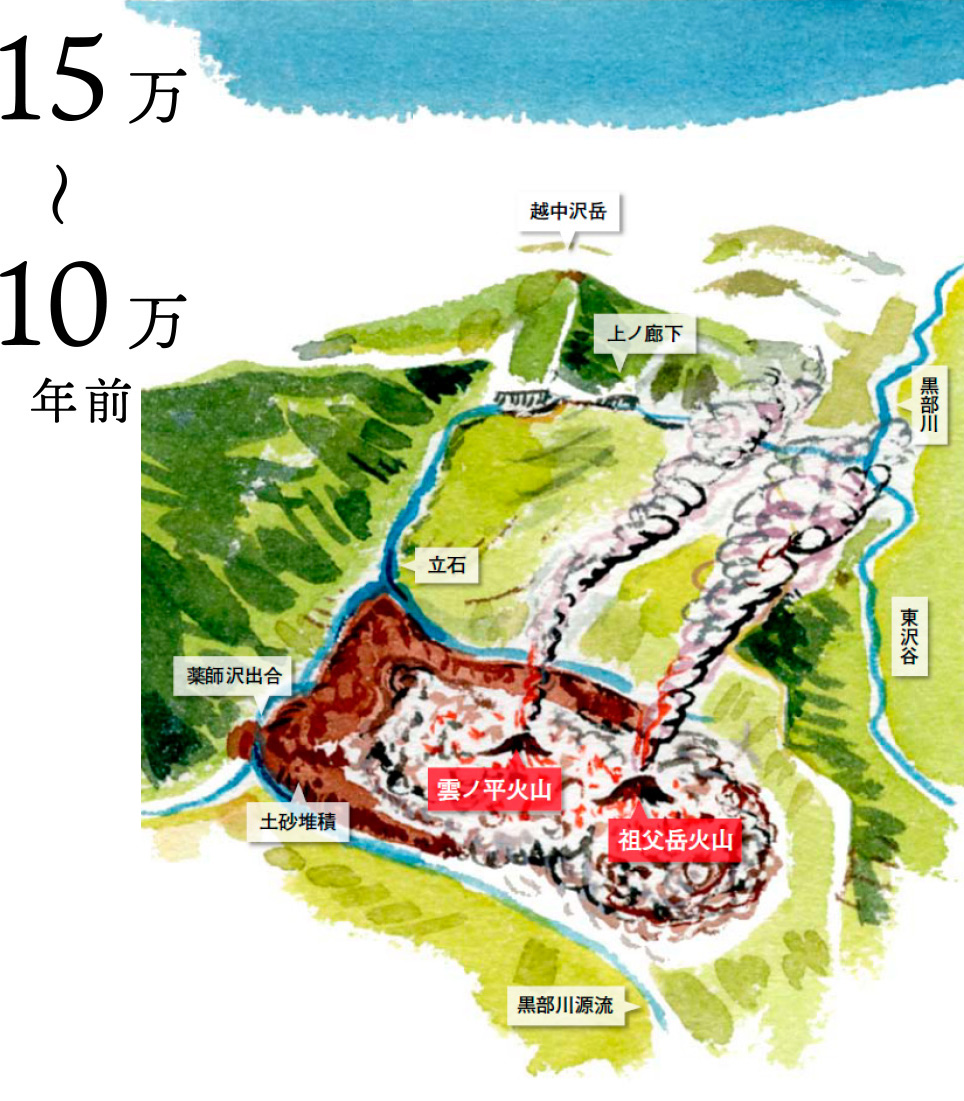 The lake that lied beneath Kumonodaira was completely buried by 100,000 years ago and a flat landscape made of sand and gravel stretched over the bottom of the ravine. Right there, further volcanic activities followed at Mt. Jii-Dake and Kumonodaira. The volcanic field grew whenever lava flowed out and drove away the Kurobe River outwards. Due to this, the Kurobe River came to change its course to surround Kumonodaira. However, as soon as volcanic activities ceased, process of erosion by the Kurobe River started again. The sand and gravel layer, that was vulnerable to erosion, was carried away while leaving the center that was covered by a thick layer of volcanic rocks and as a result full variety of vegetation came to cover even the highlands that was protected by steep cliffs. The impermeable layer that was made of weathered lava surface layer and soils created a group of small ponds and highland marsh and helps bring out the beauty in the plateau.

Professor in Faculty of Science, Shinshu University. His specialty is geology and his main study is the process of formation for mountain ranges through activities of magma and faults and includes studies of the origin of the Northern Japan Alps. Number of his days spent for exploration in the Northern Japan Alps reaches over 1,600 days. He has written several geology-related books including coauthored “”Cho-Kazan (Yari・Hodaka) (Super-Volcano (Mt. Yari and Mt. Hodaka)”。