Professionals
Makoto Kenmisaki
Photographer/Artist
My association with Mr. Kenmisaki began when he interviewed me during the construction of the Kumonodaira Mountain Hut. He was a veteran journalistic photographer who later became an established mountain guide in only a few years with his astonishing proactivity, and has now become the closest neighbor for the Kumonodaira Mountain Hut. There are countless memories when I accepted a favor from him such as support for opening the hut in season, winter mountain-climbing class, doing a porter, photographing and being the host for my wedding.

He is a traveler with flavorful life who is well acquainted with areas from culture and art to social conditions in the world, and witty though looking stern.

寄稿I am a jack of all trades.
In summer of 2009 when the first generation Kumonodaira Mountain Hut entered its last season, I as a trekker was walking towards Kumonodaira; a place I have dreamed to go to since I was attending school. In midst of untimely rain, I eventually reached to the tip of the boardwalk after a steep trail from Yakushizawa Creek, but by the time I reached the Alaskan Garden I ended up shivering and being on the brink of hitting hypothermia despite it was midsummer. When I hurriedly arrived at the Kumonodaira Mountain Hut, a surly young man attended me and curtly told me, “Make yourself warm around the stove. Please don’t dry your wet clothes on the chimney pipe”. As I started feeling relieved after ordering a nishin udon (noodle soup with herring toppings), a patched paper on the wall of the dining room caught my eye. On the paper, there was a hand-writing describing the rebuilding of this hut and the owner’s determination for this matter. I wondered who wrote these sentences, sentences that were like rugged, ups and downs trail, that is hard to walk, yet it felt so worthwhile walking. I developed an interest for the person who wrote such sentence and the backstory of this writing.

Since I have been doing photo reporting as my work for many years by then, as soon as I descended the mountains I requested him an interview for making an article report to record the rebuilding of the Kumonodaira Mountain Hut. Then, in his reply, he invited me to Kumonodaira in mid-October, immediately after the hut was closed for the season as he wanted to meet in person. On the first day of trekking, under unfortunate weather, I was forced to stay at the Sugorokugoya Hut due to a storm, and on the following day out the door, the landscape was covered with snow after the first fall of snow in the year. Under such a circumstance, as I managed to arrive on the Kumonodaira Mountain Hut, the one who welcomed me was that surly young man. He was Jiro Ito.

At the end of May on the following year, I headed to Kumonodaira when still covered with snow. While staying with carpenters and staff of the hut at the construction site, I kept a record of the building process of the new Kumonodaira Mountain Hut (“Fudebako”, magazine carrying this article is available for reading in the hut ). Since then, as I came to realize I had become an alpine guide and had spent more than a month in Kurobe Riverheads and Kumonodaira.

Though my specialty is photography and guide, I can do everything if necessary; starting from fixing the trail, doing a porter and cooking to climbing training and editing videos pertaining to the mountain huts, etc. However, there are many occasions where I am just zoning out in the dining room of the hut.

I reached the age that I wonder how many times I would be able to visit Kumonodaira in good health. It is common to have moments to reminisce thinking “if at that time…”, and I can say for sure that if I had not read that writing by Jiro at that time, I would not be the person I am today who keeps climbing the mountains.

In Kurobe Riverheads, there are some streams like the Akagisawa Creek that are not so difficult to walk along, and one can enjoy walking along while sending their thoughts to the historic “Bandits of Kurobe” who freely walked around this region of mountains. I feel my theme and humble mission now is to convey, to the general public and our customers, the attraction of Kumonodaira and the region of Kurobe Riverheads.
Like an ark, the Kumonodaira Mountain Hut allow people to embark on a journey. Do come visit and join this journey through nature, time and space. 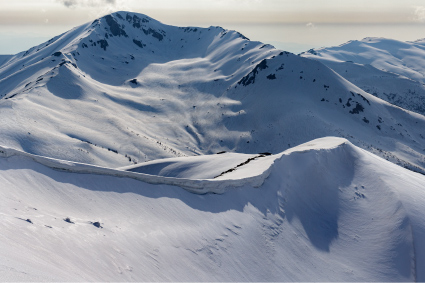 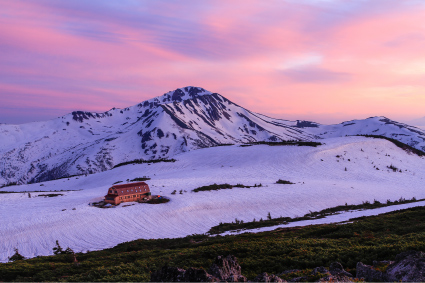 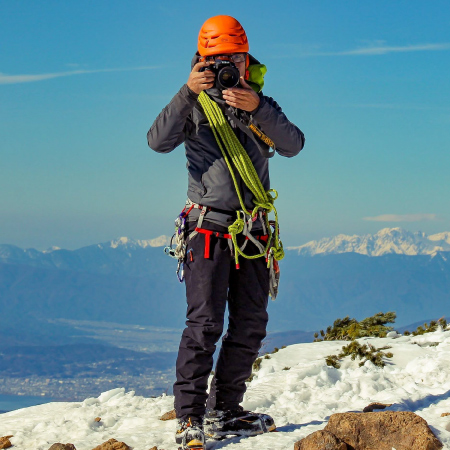 Makoto Kenmisaki
Photographer. Certified Guide in the Japan Mountain Guides Association (Mountain Guide Stage 3). He is a mountain guide who focuses on areas centering the Northern Japan Alps; such as Kurobe Riverheads area and Yari-Hodaka Mountain Range hosted by Peak2Peak Photography and Mountain Guide Office. He visits mountains while doing seasonal work such as being a lecturer for “Invitation to Photo-Trekking”; a photography class by Mont-bell.
Click here for guide order →Peak2Peak Mountain Guide Office
Professionals