Professionals
Keiko Yamato
Staff of the Yakushizawa Hut, Writer, Illustrator
Ms. Yamato is an inhabitant of the Yakushizawa Hut; located in about three hours walking distance towards the direction of Toyama side from the Kumonodaira Mountain Hut. My association with her has been close to 15 years. Although my first impression for her was something of a female painter with subdued character, as time passed, I came to be surprised by her dazzling creativity and thoughtfulness within her. She became distinguished in various media such as painter, illustrator and writer, as well as being a craftsman of figurative arts and ardent lover of fishing, her inquisitive mind knows no bounds. In spring of 2019, she published her essay book titled “Kurobe Genryu Yamagoya Gurashi (Life in Mountain Hut of Kurobe Riverheads)” that describes in her witty writing style about the universe of nature, mystery in life of people and the drama of love and hatred that unfold in interaction with local small animals. I feel her spiritual acuteness as she discovers her profound views of life and death in one inadvertent daily scene. Her unique expression brings out new perspectives on the way human beings face the mountains.
Contribution
Oops, it is already past 14:00. When I visit Jiro in the Kumonodaira Mountain Hut, I forget about the time and get immersed in a long conversation with him. Unless I descend to the creek promptly, I won’t be able to arrive in time to start the preparation of dinner for the guests. I hastily waved my hand saying, “See you again” to Jiro who said, “Well, see you next time” in his usual carefree tone, and I ran the boardwalk in short steps, down the familiar steep trail to the Yakushizawa Hut.

It has been 15 years since I first started working here at the Yakushizawa Hut of the Kurobe Riverheads. I believe working here was the best career choice for someone like me who love mountains and mountain stream fishing, and can’t clearly divide work and private life. Life here has taught me so much.

I was in my eleventh grade in high school when I started to study painting more seriously as I aspired to enter a university of the arts. When I studied sketching, I was startled. Strange, I can’t draw what’s in front of me. Something that should be familiar looks so different. Why can’t I draw it? I thought it over piece by piece in my own way. I began to think it over by drawing.

Strangely, as I continue this task, there are times when something clicks. That was the time when I could understand something in my own way. Maybe this is what it means to ‘understand’. At the same time, I felt shocked when I wondered if education had taught me anything important. From vast amount of vocabularies and paragraphs from textbooks, what have I even learned?

I felt a sudden sense of certainty that to know is not memorizing, but the body also needs to ‘think’ in order to. I, who until then was not so outgoing, started going out more often after learning to draw. Taking action and drawing are in essence a form of ‘thinking’. I traveled to places such as Africa, South America and India wishing to encounter value beyond my imagination. I kept climbing mountains without drawing. And now here I am.

The Kurobe Riverhead throws me various questions. I continue to get ponder upon these questions while enjoying the benefit of being here. This is the type of relationship between the Yakushizawa Hut and me. Although these questions may never be solved, I earnestly wish that I can get closer to that ‘something’. Not because I want to win over existence, but like the time I kept drawing to be taught. 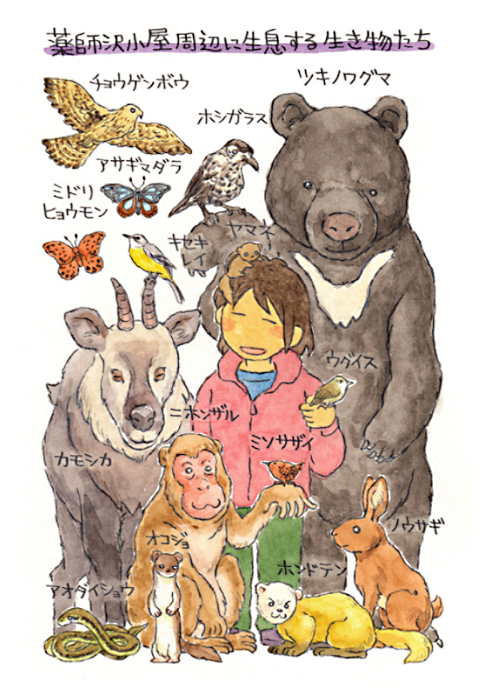 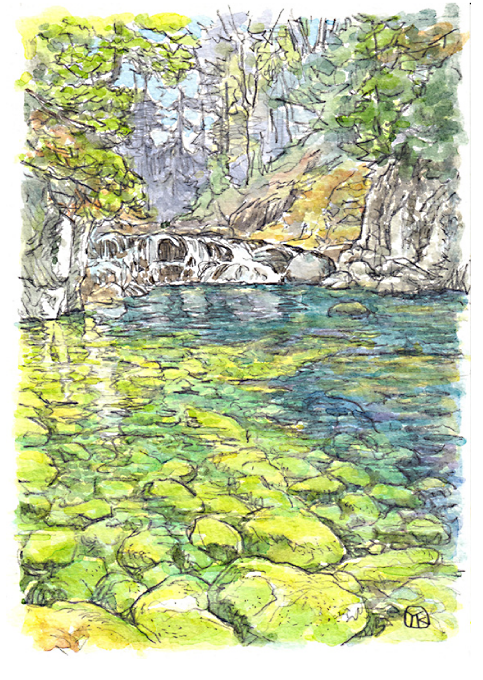 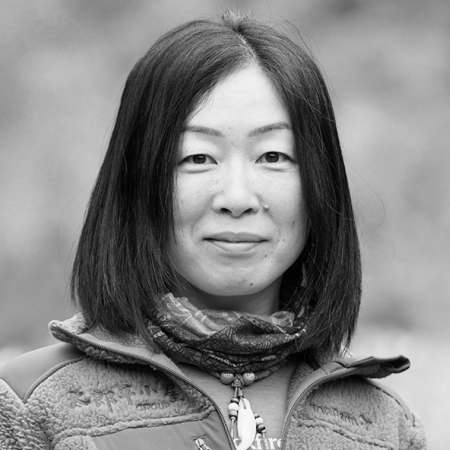 Keiko Yamato
She was born in Oobu City, Aichi Prefecture in 1974. She graduated with a major in Oil Painting, College of Arts and Design in Musashino Art University. She is an illustrator.

She began climbing on the Northern Japan Alps for the first time when she was in high school and was drawn to mountains. When she was in college, she was a member of Wander Vogel Club (hiking club) and climbed around Japanese mountains. At the same time, she also indulged herself in stream fishing and began to trek along streams. After her graduation, she became a member of the Suzuran Alpine Club and her mountaineering came to center around stream climbing and backcountry skiing.

While being an illustrator and doing works of figurative arts, she began to work for the mountain hut as a seasonal worker when she was 29 years old, and her life in the mountain hut began. Around this time, she also started to travel alone overseas to countries such as Africa, South America and Nepal while drawing pictures.